Tax benefits for adoption include both a tax credit for qualified adoption expenses paid to adopt an eligible child and an exclusion from income for employer-provided adoption assistance. 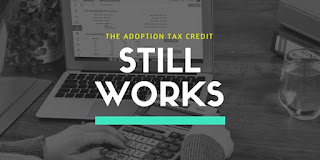 The credit is nonrefundable, which means it's limited to your tax liability for the year. However, any credit in excess of your tax liability may be carried forward for up to five years. The maximum amount (dollar limit) for 2016 is $13,460 per child.

We are tax relief experts specializing in IRS back tax help, Installment Agreements, tax lien help, wage garnishment release, IRS Offer in Compromises and a whole lot more. Get a free consultation from an experienced tax relief expert today (800)790-8574 or visit www.advancetaxrelief.com
Other Ways to connect with us:
https://plus.google.com/+ADVANCETAXRELIEFLLCHouston
https://www.facebook.com/advancetaxrelief/
https://advancetaxreliefexperts.tumblr.com/
https://www.yelp.com/biz/advance-tax-relief-llc-houston